For the past five months the Salinas Police Department Investigations Unit, the Monterey County District Attorney’s Office, Salinas Violence Suppression Task Force and Homeland Security Investigations (HSI) Monterey Office have been conducting an ongoing investigation into NorCal Transportation, who is suspected of operating a drug trafficking organization (DTO) with the specific intent to transport and distribute narcotics between Yuma, Az and Salinas, Ca.  During the investigations it was determined that, Nor Cal Transportation was directly connected to the Sinaloa Cartel and transporting narcotics in conjunction with Norteno gang leaders.

There were over 170 law enforcement personnel who assisted in the execution of the multiple search warrants and aided in the apprehension of the criminals identified in this investigation. Salinas Police Department and HSI Monterey Office would like to thank the following agencies that assisted in the warrant services;

California Department of Corrections and Rehabilitation, Federal Bureau of Investigation

Arizona Department of Public Safety, US Customs and Border Protection

It is especially important to acknowledge the tremendous assistance provided by several long-term partners. Their commitment to this investigation has been critical to the successful outcome and cannot be underestimated. Numerous other law enforcement partners and outside agencies provided investigative support during this operation, including HSI Yuma Arizona, Department of Public Safety (DPS) Casa Grande Arizona Office, DEA Monterey, FBI Monterey and CDCR.

Throughout the course of the investigation approximately 60 pounds of methamphetamine, 5 pounds of heroin, a pound and a half of cocaine and 25,000 Fentanyl pills were seized. In addition, 9 firearms were seized, along with two bank accounts, a Nor Cal Transportation tractor trailer and approximately $90,000 in cash/cashier’s checks.  All items seized are believed to be proceeds from illegal narcotics sales.

The eight individuals arrested are facing charges including conspiracy to transport and distribute narcotics, firearms possession, gang enhancements and conspiracy to commit murder. The following is list of arrestees: 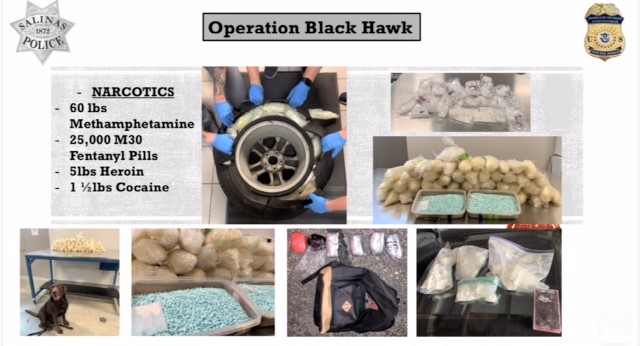